21st November 2020 I attended the Families Need Fathers Annual Convention. The guest's speakers were the Baroness Deborah Stedman-Scott Under Secretary of State at the Department for Work and Pensions and Duncan Gilchrist Deputy Director Child Maintenance and Policy Exploration at Department for Work and Pensions (DWP).It was the usual rhetoric lifting children out of poverty rubbish, they were answering questions obviously which suited them and ignored the inconvenient and uncomfortable ones.You will see in this screenshot that I took  I had informed them of Gavin's suicide/case, Stedman-Scott had previously been made aware of Gavin's suicide also.

I also mentioned that I had a load of evidence which supported fraud being carried out by the Child Maintenance Service and a public inquiry is required. They obviously ignored my comments, given the fact that I was bringing to their attention I had evidence of wrongdoing by their department you would have expected anyone with morals  would request to see the evidence to support my allegations after all Ministers are supposed to uphold the law and act within the restraints of the Ministerial Code Ministerial accountability is a constitutional convention that ministers are accountable to Parliament for the actions of government.   Same with public servants they are to act within the constraints of the Civil Service Code. In the Ministerial Code Civil Service Code and the Cabinet Manual you will see the seven principles of public life. The thing is with this many MP's Ministers of the Crown and Civil Servants have been made aware by thousands of members of the public that the CSA/CMS have been acting in bad faith and committing fraud, this public concern/complaints have been falling upon deaf ears and the Government have been pumping out dishonest and misleading information regarding the operations of the CSA/CMS in the media. 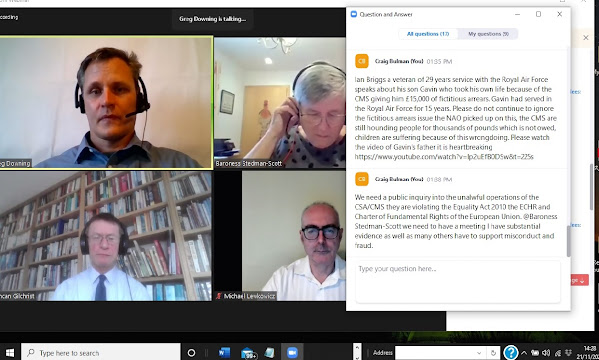 Come 22nd December Baroness Stedman-Scott publishes an article in Politics Home The Child Maintenance Service is an essential backstop against poverty read the biased and dishonest article click here As you can see the screenshot she was made aware that I had evidence of serious wrongdoing and not to forget the suicide of Gavin. Since taking the role of Under Secretary of State for DWP she has been emailed by thousands of aggrieved members of the public complaining about fictitious arrears CMS causing severe distress and mental health issues. Her article has been written with the knowledge of wrongdoing, fraud and malfeasance she has knowingly provided the public with false and misleading information which means that she is in breach of the

1. The Seven Principles of Public Life The Seven Principles of Public Life (also known as the Nolan Principles) apply to anyone who works as a public office-holder. This includes all those who are elected or appointed to public office, nationally and locally, and all people appointed to work in the Civil Service, local government, the police, courts and probation services, non-departmental public bodies (NDPBs), and in the health, education, social and care services. All public office-holders are both servants of the public and stewards of public resources. The principles also apply to all those in other sectors delivering public services.

1.1 Selflessness Holders of public office should act solely in terms of the public interest.

1.2 Integrity Holders of public office must avoid placing themselves under any obligation to people or organisations that might try inappropriately to influence them in their work. They should not act or take decisions in order to gain financial or other material benefits for themselves, their family, or their friends. They must declare and resolve any interests and relationships.

1.3 Objectivity Holders of public office must act and take decisions impartially, fairly and on merit, using the best evidence and without discrimination or bias.

1.4 Accountability Holders of public office are accountable to the public for their decisions and actions and must submit themselves to the scrutiny necessary to ensure this.

1.5 Openness Holders of public office should act and take decisions in an open and transparent manner. Information should not be withheld from the public unless there are clear and lawful reasons for so doing.

1.6 Honesty Holders of public office should be truthful.

1.7 Leadership Holders of public office should exhibit these principles in their own behaviour. They should actively promote and robustly support the principles and be willing to challenge poor behaviour wherever it occurs.

As you will see Baroness Stedman-Scott has ignored inconvenient facts has ignored public concern and has published a dishonest and biased article, she has not acted in the best interests of the public.

I sent the podcast to Anne Widdecombe for her to watch, she very kindly responded, as you can see by her response she is aware that the Child Support Agency/ Child Maintenance Service are responsible for many suicides attempted suicides and mental health breakdowns. I have sent this email to Stedman-Scott a number of times so she is fully aware of the issues caused by the Child Maintenance Service.

Many MP's have been made aware of the mental health issues caused by the CSA/CMS but they are not interested in doing anything about this wrongdoing. 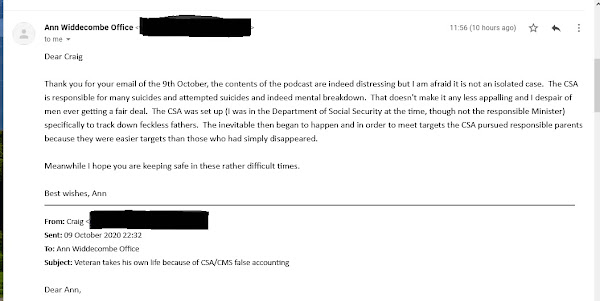 Johnny Mercer has ignored these issues, had he have taken action when he was made aware on the 30th July 2019 that the CSA are causing mental health issues in the Veterans Community then Gavin may still be here. So much for the constitutional convention of Ministerial Accountablity!

Ministers, Members of Parliament are fully aware of the wrongdoing of the Child Maintenance Service yet still give them powers to raid peoples bank accounts. The CSA/CMS have been raiding peoples bank accounts with no proof that the arrears are owed. They also enforce DEO's knowing mostly the arrears are fictitious but sadly the employer is obligated to set up the DEO. There is serious abuses of power happening the Ministers and senior Civil Servants quite clearly do not care even though they know the illegal operations of the CSA/CMS is forcing people to suicide. 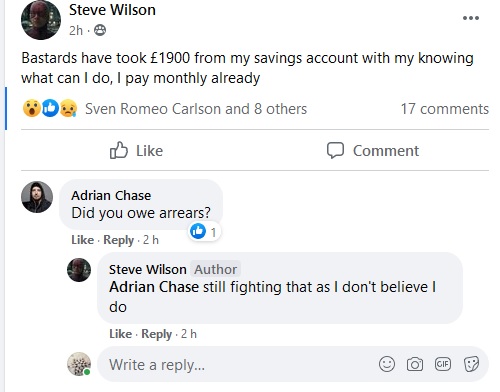 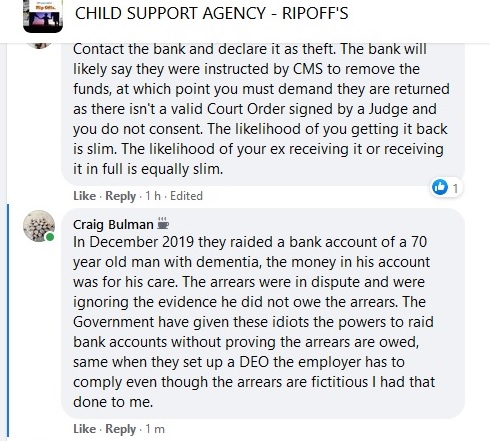