Fraudulent Arrears Report to the Police

Making a Fairer Child Maintenance System for All

We are now encouraging ALL parents who are a victim of fraudulent arrears and sharp tactics by the CMS to REPORT the same to the police.

The police may be aware of some of the issues but will be unable to act until they receive a significant number of reports. We are unable to comment on the specifics of any investigation or even confirm an investigation is currently ongoing.

You should report Fraud to EITHER your local police on 101 or through their website if that service is available in your area OR to the body responsible for collating this type of offence who are Action Fraud (unless you live in Scotland, Police Scotland do not use Action Fraud, please report directly to them).

Reporting to the Police

The below is copied and pasted from the website for the government agency Action Fraud:

Fraud is when trickery is used to gain a dishonest advantage, which is often financial, over another person.

We have been presented with the following scenarios, which we believe constitutes an offence under The Fraud Act 2006:

I have my children more than what RP has told the CMS, I am overpaying and they won’t listen to me.

I pay the RP through the CMS and she has told me that they are not giving her any money. The CMS and the RP wont listen to me.

The CMS have increased the amount I have to pay and the money that I earn hasn’t changed, they will not listen to me.


What Should I Do?

Fraud is a criminal offence, it is the responsibility of the police to record and investigate these offences. Action Fraud are a body that collect crime reports and pass the offence onto the police service in the area where the offence has occurred. In these cases the victim will be the NRP and therefore your recorded address.


How Do I Report this?


Why Should I Tell Them?

Contacting the police can be worrying, for this you don’t need to be worried as the police are there to help you.  The Victims Commissioner is there to champion the rights of victims.


What Should I Say?

You should have the following information readily available, your own details which is name and address etc, approximate dates of when the CMS first contacted you and then a brief summary of what the fraud is and what you’ve done to try and remedy it and the outcome.

It is suggested that you tell the Police and Action Fraud the following:

Hello, I want to report that I believe I am a victim of crime because…

Provide brief details of your case as summarised in the fraud examples.


What Should Happen Next?

The Police have a statutory duty to record and investigate crime, crime is recorded on a balance of probabilities test. Is it likely to have happened? If yes, the Police must record this incident as a crime and give to you a crime reference. They should carry out some form of investigation and keep you updated at regular intervals as to the progress of that investigation.


What Do I Not Need to Worry About?

You don’t need to gather evidence or investigate this offence. Your role in this is to provide the information for the police to investigate and if required to provide a statement to a police officer.

You don’t need to worry about which section of act these offences are covered by. The police are trained professionals and it is their responsibility to accurately record crime. 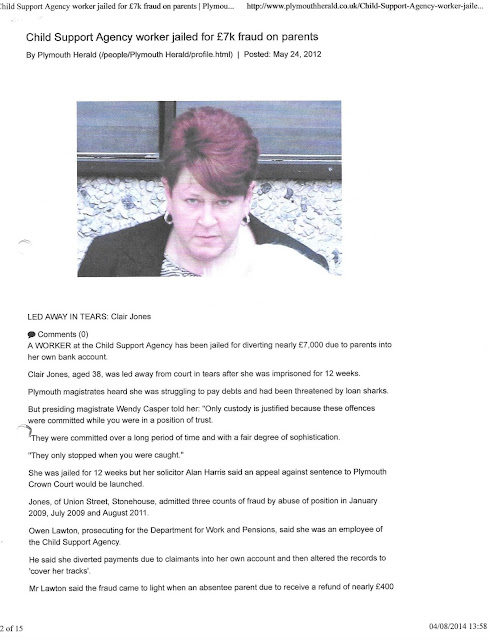 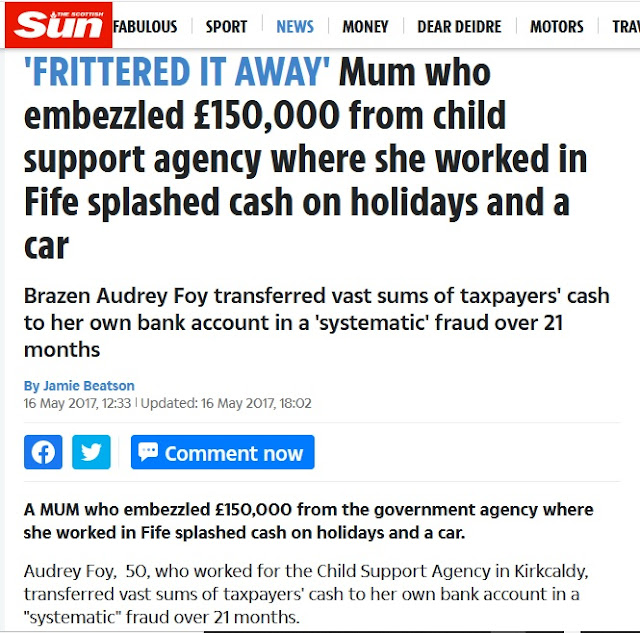 Could this still be happening with other members of CSA/CMS staff? There is a lot of unanswered questions lots of fictitious arrears of which is unexplainable are they creating these fictitious arrears and siphoning them off into their own bank accounts?

When making your complaint to the Police be sure to make them aware of the two above cases Claire Jones and Audrey Foy.